Why Enterprise ERP Is Adopting Agile

General Electric, America’s largest manufacturing company, was one of the earliest IT innovators, having purchased the first commercially available UNIVAC computer in 1953 to handle payroll at its Appliance Park facility in Louisville, Kentucky.

Flash forward to 2009, and IT had become a bottleneck.

In this 2012 TechRepublic article, Jason Hiner documented GE’s historic project to re-invest $1 billion to revitalize its manufacturing facilities and create 1,300 new American jobs by 2014, a project hailed by politicians, business leaders and workers as the “Revitalization of U.S. Manufacturing.”

GE’s systems had not been updated in 20 years, and had become a mashup of disparate technologies that weren’t communicating with each other. Kocsi’s job was to consolidate hundreds of different apps, platforms and ERP systems into one standard ERP platform. 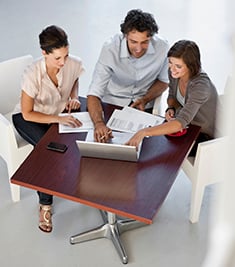 With an aggressive project time-frame, Kocsi realized that utilizing the traditional waterfall approach would have taken from 18 to 24 months to implement, time he didn’t have.

Instead, Kocsi and his team decided to use Lean and Agile principles and concepts to deliver the $200 million GE enterprise systems implementation.

The first piece of the platform was delivered within 6 months of project start, enabling an initial group of employees to begin using the system and provide feedback to the implementation team.

According to Hiner, the end result:

“…was creative, risky, and highly unorthodox. But, it has been so successful that it may turn out to be a new model for how to run business technology projects and how to organize IT.”

The Need for Agile in Enterprise ERP Projects

As a result she advocates the adoption of Lean thinking principles and Agile disciplines and techniques within the enterprise systems space, as Alan Kocsi did at GE.

Danièlle explained that lean thinking identifies and eliminates waste and non value-added activities through continuous improvement, and by regularly exposing products to elicit customer feedback in pursuit of perfection.

She noted that IT shops that have never used Lean thinking principles spent less than 10% of their time on customer value-added activities, such as actually delivering the applications.

World-class IT shops, on the other hand, spent 35-55% of their time on customer value-added activity. That is a significant difference.

Danièlle cited the example of the Orange County, Florida School District, which in 2009 transformed their entire ERP sustainment team using Agile principles to keep from drowning under the pace of changing school regulatory requirements.

They were able to complete their new enterprise systems projects weeks early and under budget.

U.S. Army Delivers Lean Project to Soldiers Across the Globe

Until they adopted an Agile project methodology in 2012, the US Congress was threatening to shut the program down. After 10 years they had not delivered a single solution to the soldier in the field.

Yet within one year of adopting the Agile methodology the Army was fielding its supply chain and tactical financial solution across the globe.

Enterprise IT departments are making radical changes in order to adapt to the relentless pace of a faster, leaner, more global business environment.

And quoting her fellow country man, Nelson Mandela, Danièlle concluded, “We can change the world and we can make it a better place. It is in your hands to make a difference.”