What are the different types of Augmented Reality?

Augmented reality (AR) is one of the current technological trends that is spreading day by day. This technology allows to visualise the real-life environment with a digital augmentation overlay, being a highly visual and interactive method with digital content such as sounds, videos, graphics and GPS in real working environments through cameras. 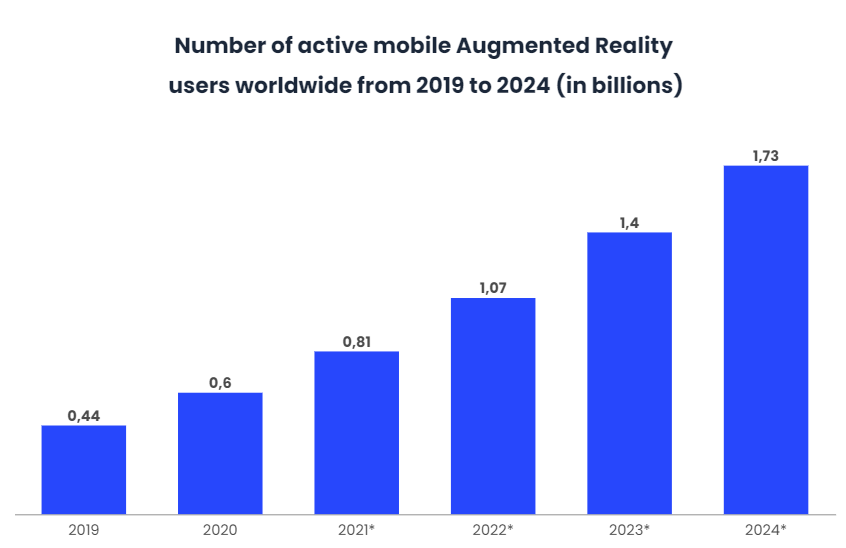 Currently, AR can be generated through applications on conventional devices such as smartphones, tablets, Hololens, etc. Little by little, this technology is looking for new application sectors to improve their workflows, especially in view of the arrival of 5G.

Google, Facebook and Amazon are some of the giants that use AR software to optimise their productivity. For example, Instagram or Snapchat create fun filters for their users.

Thus, augmented reality is defined as an altered form of reality in which computer-generated content is superimposed on the user’s real-world views, allowing digital assets to be added to their physical environment. AR must also meet three basic characteristics:

However, there are different types of ARs and their differences should be known, as each will be more suitable for a particular use, although they all share common features. Thus, the main differentiation will be between:

Marker-based AR applications use target images (markers) to position objects in a given space. These markers determine where the application will place the 3D digital content within the user’s field of view. Early-stage AR technologies were based on markers.

In other words, these applications are linked to a specific physical image pattern marker in a real-world environment in order to superimpose the 3D virtual object on it. Thus, the cameras must continuously scan the input and place a marker for image pattern recognition in order to create its geometry. In case the camera is not properly focused, the virtual object will not be displayed.

Consequently, a marker-based image recognition system requires several modules, such as camera, image capture, image processing and marker tracking, among others. Generally, this is a simple and inexpensive system to implement in filters through a custom application to recognise specific patterns through a camera.

An example of this type of augmented reality is used by Instagram and Snapchat through filters and games. Therefore, this type of AR is already introduced in the daily life of human beings as they are routine social activities.

In contrast, markerless AR allows virtual 3D objects to be positioned in the real image environment by examining the features present in the data in real time. This type of guidance relies on the hardware of any smartphone, be it the camera, GPS or accelerometer, among others, while the augmented reality software completes the job.

With this model, there is no need for an object tracking system due to recent technological advances in cameras, sensors and AI algorithms. Thus, it works with the digital data obtained by these sensors capable of recording a physical space in real time.

Primarily, markerless analysis uses simultaneous localisation and mapping (SLAM) to scan the environment and create appropriate maps on which to place virtual objects. SLAM markerless image tracking scans the environment and creates maps of where to place virtual objects in 3D, even if the objects are not within a user’s field of view, do not move when the user moves, and the user does not have to scan new images.

Therefore, this technology is able to detect objects or characteristic points in a scene without prior knowledge of the environment, for example, it can identify walls or intersection points. This is a technology that is characterised by its association with the visual effect of combining computer graphics with real-world images.

The first systems using this type of AR used the location and hardware services of a device to interact with the resources provided by the AR software, in such a way that the user’s location and orientation in the space where he/she was located was defined.

Another feature of this type of AR is that users can increase the average range of motion while experiencing the experience. Apple’s ARKit and Google’s ARCore SDK have made markerless AR available on smart devices. Currently, markerless AR is the preferred image recognition method for applications employing this technology.

Thus, there are four categories of markerless AR:

Location-based markerless AR aims at the fusion of 3D virtual objects in the physical space where the user is located. Clearly, this technology uses the location and sensors of a smart device to position the virtual object at the desired location or point of interest.

The most representative example of this type of augmented reality is the smartphone game Pokémon GO, which uses markerless, location-based AR, bringing the user’s environment to life immediately depending on where they look.

In addition, this typology allows the option of adding interactive and useful digital content to geographies of interest, which is very beneficial for travellers within a specific area by helping to understand the environment through 3D virtual objects or videos.

This methodology is used for the delivery of digital data within a stationary context, i.e. project-based AR focuses on rendering virtual 3D objects within the user’s physical space.

Therefore, AR allows the user to move freely around the environment of a specific area where a fixed projector and a tracking camera are placed. The main use of this technology is to create illusions about the depth, position and orientation of an object by projecting artificial light onto real flat surfaces.

For example, projection-based AR is suitable for simplifying complex tasks in business or industry, eliminating computers because instructions can be placed in a given space. In addition, this technology is able to provide feedback to optimise digital identification processes for manufacturing cycles.

Typically, this AR is used to replace the original view of an object with an updated virtual image of that object for the human eye. Overlay AR provides multiple views of a target object with the option to display additional relevant information about that object.

Essentially, this technology, through the use of special cameras, is used for human eyes to outline specific objects with lines to facilitate certain situations. For example, it can be used for car navigation systems to enable safe driving in low visibility situations.

Currently, the number of applications that augmented reality has is quite high and continues to grow, among these applications are retail surgery for healthcare, customised cars to promote autonomous driving, it can be seen in schools for teaching, immediate translations can be made, intelligent facial scanners, military applications, and so on.

However, the same type of augmented reality cannot be applied for each of the applications mentioned, as the needs are different in each sector. Mainly, there is a classification into two main groups: marker-based AR and markerless AR, the former being the most primitive version of this technology. In turn, within markerless AR there are 4 types: location-based AR, projection-based AR, overlay AR and contour AR. Each typology has an application and is based on a different technological principle as we have seen.