VR, AR and MR will revolutionize the health sector

The prevalence of the 5G network and the availability of low-cost hardware with immersive solutions will be the main cause of the growth of the Mixed Reality market.

Although the first commercial products depend heavily on the consumer market, in the coming years the Bring Your Own Device (BYOD) trend is more likely to be strongly supported by Mixed Reality.

The growing adoption of MR in the gaming and entertainment industries, as well as increased demand from the education industry are having a positive impact on market growth. However, the high cost of MRI devices can be a stumbling block to global market growth.

The future of the Mixed Reality market

Leaving aside the drawbacks that may arise in the Mixed Reality path, growth is driven by key suppliers establishing strategic partnerships with external suppliers that enable them to increase their area of action and customer service capabilities.

According to the latest studies, the global Mixed Reality market is expected to grow at a compound annual rate of over 40 per cent and reach a value of over $3.7 billion by 2025. 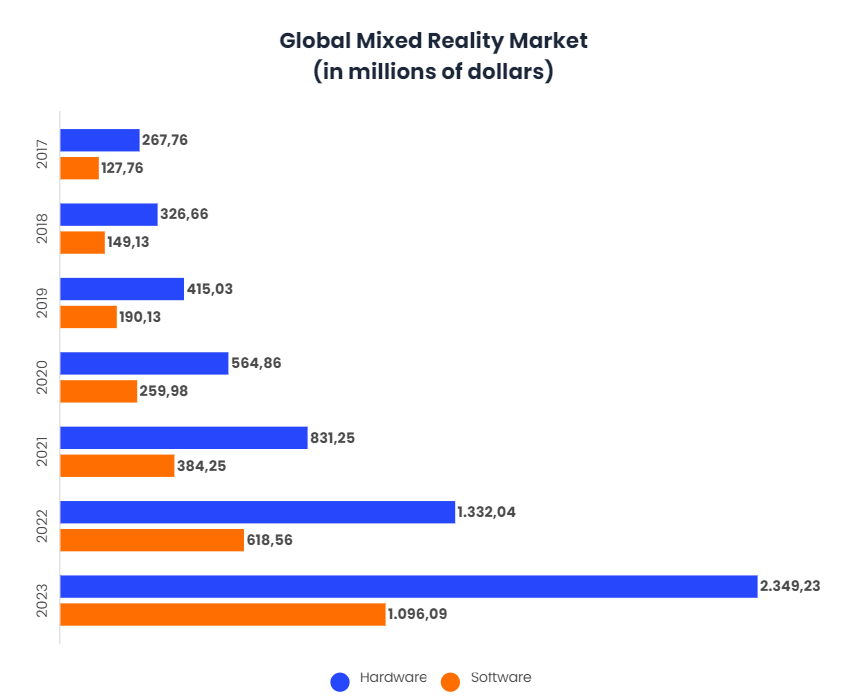 Media and entertainment, including games, are the sectors that will most influence market growth due to the need to meet the needs of consumers.

Improving the visual experience of users is leading providers to implement Mixed Reality technologies in their technology strategy. This will mean an improvement in sensory perception due to the availability of content that helps bridge the gap between imagination and reality.

However, in the coming years, MR would not be limited to visual effects alone, as immersive technological enhancements in general, such as AR headphones improving the audio experience by filtering out specific sounds from the real world.

Today, North America has the largest share of the global market, mainly due to the high adoption of immersive products and advances in technology including 5G and Artificial Intelligence (AI).

Virtual Reality in the field of health

Until now the media and entertainment have been talked about as the sectors most interested in immersive technologies, however, in recent times the health sector has emerged as a clear “customer”.

Recent research shows that one-third of first-time visitors to a hospital are lost or confused on their way. Even hospital staff say that in critical situations they can become confused. For such a specific location, dislocation could pose a health risk to both patients and visitors.

Faced with this situation, hospitals are already investing part of their budget in signage, digital kiosks and other orientation systems. However, after implementing Artificial Intelligence to improve their efficiency, they have found a great opportunity in the integration of Virtual Reality and Mixed Reality technology, to improve the situation of all healthcare users, from patients, through staff or companions.

To improve orientation, Virtual Reality has the greatest potential before the patient or visitor sets foot on the hospital campus. Using a virtual tour or an interactive map, hospitals can provide a powerful way to guide people to their destinations.

While sales of VR headsets are on the rise, 50% more VR headset shipments in 2019 than in the previous year, not all medical center users will have or want to use Virtual Reality headsets, which “forces” hospitals to have these devices in the hospital.

Researchers at the University of West Virginia were among the first to conduct a study to highlight the usefulness of VR for orientation. These are interactive maps that allow a previous visit to the center, such as the one offered by The Christ Center Health Network.

It is important to add that these tours do not require the creation of a virtual hospital. It is much easier to build an VR-enabled tour using software that allows you to link 360º panoramic images of the facility. This is readily available technology and, perhaps most importantly, the tour provides the patient or visitor with accurate images of what they will see on the site.

Several studies have found that experimenting with Virtual Reality benefits memory retention, so VR has a long way to go to improve the overall patient orientation experience.

While there are currently no hospitals that use Augmented Reality publicly to find indications, there are some projects in progress. For example, the Rochester Regional Hospital is immersed in a project to create prototypes that demonstrate the potential of AR mobile orientation for visitors and center staff.

In a healthcare setting, AR has incredible potential. On the other hand, in 2018, another complex public space, Gatwick Airport, introduced an AR orientation system that uses 2,000 battery-powered beacons throughout the airport. With the drawbacks of indoor GPS, the beacons make a lot of sense and are relatively easy to install and maintain. As a result, Gatwick was able to configure the hardware in about three weeks, followed by months of testing.

According to Abhi Chacko, head of IT innovation and business at Gatwick Airport:

“By providing the infrastructure, we are opening the door to a wide range of expert airport technology providers, including our airlines and retailers, to launch new real-time services that can help passengers orient themselves at the airport, avoid missed flights or receive timely offers that could save them money.”

Immersive technologies have come a long way in a short time and are expected to continue to evolve in the future, expanding beyond the usual sectors such as media or entertainment.

In the coming years, immersive technologies will improve the orientation of hospitals, thanks to the use of software that allows navigation inside buildings.

While orientation seems to be the main utility of Virtual, Augmented or Mixed Reality, there are also other uses, from the ability of airlines to send text message updates, to promotional offers from retail companies.