Using videos to get closer to employees

IT professionals are naturally early adopters when it comes to gadgets and new services online. You were probably spreading YouTube videos among friends and family long before everyone else you kow. That potential interest in video and online media can also be applied at work, especially for employees of IT and outsourcing companies.

The Latin American branch of research company IDC has just released a study in which it shows how much IT workers watch online videos related to themes of their professional areas.

The company asked IT professionals in six different Latin countries whether they watch those videos on a regular basis. Surprisingly, the top of the list with the biggest number of positive answers is not Chile, usually considered the most “modern” economy in the region, nor Brazil nor Mexico, which both have the strongest IT markets of the countries surveyed. First place went to Venezuela, a country that suffers from difficulties attracting international investments due to its political situation.

In Venezuela, 80% of the surveyed IT professionals said that they usually watch online videos to improve or know more about their own areas of knowledge. Next on the list comes Colombia, with 77.7% and then Brazil, with 76.7%. In Mexico, 74.4% responded positively. At the bottom of the list came Chile (72%) and Argentina, far behind Venezuelans, with 67%. The region's average was 74.7% – so three out of every four of those professionals are used to watching videos related to their area of IT.

Luciana Sarion, marketing manager of IDC for the region, says that such videos can be used in a very good way by IT service companies to tutor professionals from multinational companies in a way that is much more interesting than reading pages and pages of a manual, for example. Another good option is to use these videos for B2B, and get closer contact to current and potential clients. She advises, though, that videomakers have to strive for quality and employ good production values, a good script, a good presenter, and interesting multimedia effects.

Quality is extremely important because viewers of these videos are likely to share them among colleagues and friends. Don't forget we are talking about early adopters, who can be harsh critics. 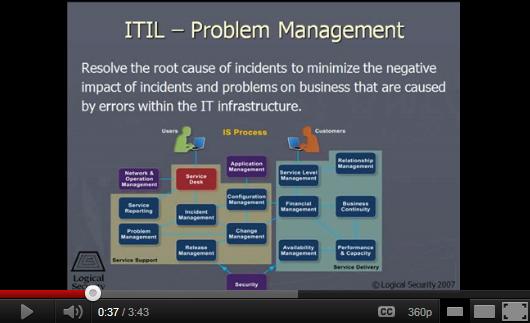 [Image from an YouTube video of the Information Technology Infrastructure Library]

At the same time, foreign IT and outsourcing companies that operate in Latin America and decide to invest in videos have to remember one detail: the language barrier. Even though most of the IT professionals are fluent or have a good level of English (or at least they should), the language of Shakespeare and Hemingway is not their mother tongue, and probably neither for their friends on Facebook or their followers on Twitter.

Two options might work when it comes to that: use Latin professionals speaking in their native language, or use subtitles. Personally, I believe the second option would work the best.

At least in Brazil, everybody is used to watching movies with subtitles. That is part of life. Nowadays, the same is true for online videos. And besides, that is a good way for the professional to become closer to a foreign language, especially to terms that are specific to their career or area of interest.

It is good to remember that IT and outsourcing employers who intend to spread videos through their Latin American affiliates and clients should provide a version of the subtitles in Spanish – and in Portuguese if Brazil is also the target. Even though the languages are close, they are not the same. And a version in "Portuñol" – usually referred to by locals as a creative mix of both languages – might not be a good idea when it comes to content for IT professionals at work.