TweeksBI Nine: The Future That Never Was

I’ve always been fascinated by predictions and different visions of the future—anything from Jules Verne to Isaac Asimov; from 2001: Space Odyssey to The Jetsons; and of course Disney’s Tomorrowland.  In recent days I stumbled upon two fantastic examples of these predictions from the past. 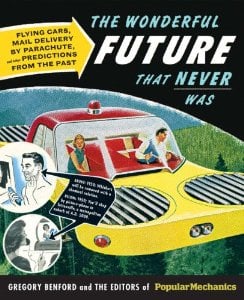 One is “The wonderful future that never was,” a collection of predictions made by scientists and experts, published in Popular Mechanics between 1903 and 1969. Predictions as flawed as the rooftop lake or moving stairs outside of buildings, to some reasonably accurate, like microwave cooking or frozen dinners.

A common denominator I noticed among most of those predictions is that they are adaptations of the technology and materials of that time. Look at the flying car in the picture, a 1950’s car with 50’s industrial fans and police car lights. People in most of these vintage future illustrations are dressed and groomed according to the prevailing style of the time when they were created.

The second example came via Twitter: a fantastic clip from 1967, with Walter Cronkite describing the home of the 21st century. Cronkite demonstrates the “Computerized Communications Console,” pointing out that “with equipment like this in the home of the future, we may not have to go to work; the work would come to us.”

What would Cronkite think about the fact that everything he talked about in that segment is a reality today? The big difference would be that we do not need a console occupying most of a small room, but we can carry that and much more in our back pocket.

Last year I attended a talk by Magnus Lindkvist, trendspotter extraordinaire, and he told the story of a group of urban planners in 1955, which gathered to imagine and visualize how people will live, travel and commute in the year 1990. Their vision is depicted in this picture: 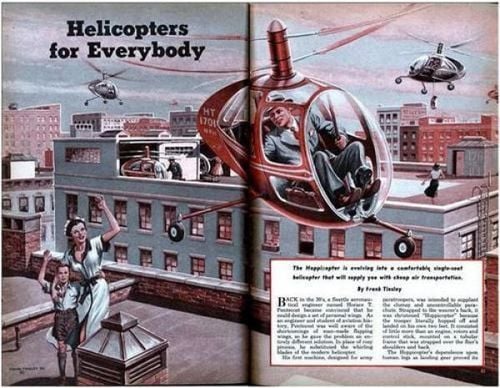 Lindvkist followed up by pointing out that those urban planners were so far ahead, that still in 2012-2013, we are not even near to having personal helicopters for everybody. But most importantly, they failed to anticipate, not only that people do not wear fedoras anymore, but that there would be such relevant and profound changes in human history, like the emancipation of women, or the configuration of the modern family.

Last year I visited Walt Disney World’s “Experimental Prototype Community of Tomorrow” or
EPCOT, and I was surprised to see that Kodak remained a big sponsor of the park. I think both Kodak and EPCOT are examples of how difficult it is to accurately predict the future.

The point that I’m trying to make is that our ability to predict and anticipate the future is seriously constrained to our existing frame of reference.  A technologist may have a reasonable idea of what
is possible in the future in the technology field, but she may miss the context of socioeconomic changes, advances in medicine or even human evolution They all play a significant role in the evolution and adoption of technology.