I don’t know about you, but my TV and movie watching habits have been in constant change for the last 20 years.  My three and six-year-old kids have definitely played an important role in that constant change, but it has mostly been driven by external factors.

I’ve moved from five or six TV channels to choose from, to over a hundred; from free TV, to monthly subscription to on-demand TV; from spotty, static-filled images with poor sound, to high-definition and Dolby sound.

As for the movie-watching front, I’ve moved from having two or three options for showings at the local movie theaters—offering soggy popcorn and flat soda—to the 12-theater multiplex featuring comfy chairs, a sushi bar and amazing surround sound. I’ve moved from a handful of VHS movies, to thousands of movies for rent, download or on-line viewing available through my cable 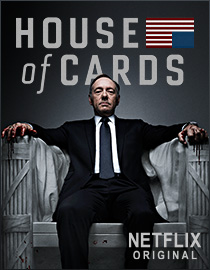 provider,
iTunes, Amazon or Netflix. I’ve evolved from paying hundreds of dollars a year on late fees, to one monthly all-you-can-watch fee.

This past Friday Netflix released the first season of House of Cards, a fantastic original TV series available for on-demand consumption featuring Kevin Spacey, one of my favorite actors. I’ve watched three of the thirteen episodes, and I’m hooked!

I’m hooked not only because it’s an excellent show, and Francis Underwood (Spacy’s character) is ruthless and captivating, but because for the TV industry—as TVWorthWatching.com’s David Biaculli says—it is “a game-changer.” This show may mark a new era for the way TV networks make content available to the public, and how they interact with their viewers.

The evolution that I outlined above, as well as the one that is about to begin, is enabled by the digitization of the media business. Perhaps the most obvious element of digital enablement is in distribution of content. Movies, TV shows, songs, newspaper articles, you name it…any type of content can be digitally distributed across the world in a matter of minutes; accessible anywhere,
anytime from a wide variety of devices.

But the possibilities expand way beyond distribution. Netflix has been amassing an enormous quantity of data over the past few years. They know what, when and how their subscribers watch. They can aggregate all this information to identify trends and better serve their customers. Furthermore, they can drill down and identify individual patterns of media consumption, and they can come up with personalized suggestions.

For decades TV networks have relied on media agencies like Nielsen or Ipsos to understand the
ratings of their shows. They poll and survey their audience to get a better idea of the popularity of their series. They need to conduct pilot programs, and have writers constantly at hand to adapt and fine-tune their shows. It is a fairly uncertain business model, when it comes to producing revenue-generating content.

Today Netflix has the vantage point of knowing, with a much greater degree of certainty, how their original content will be received. They must certainly know that movies with Kevin Spacey get great reviews. They know that political dramas are well rated. They know that the original version of House of Cards, produced by the BBC, is well regarded by their viewers. They know that many
people, like me, like to watch TV seasons at our own pace, sometimes two or more episodes a night. Furthermore, they know exactly who watched the series, what device they were using, what day of the week, and at what time. They know when people paused, and who preferred to use close captioning. They can tell if the viewer was at home or on the road. To me, their bet has a greater chance to succeed than that of the TV network.

The digitization of the business world has opened new avenues for business innovation, new business models, and thankfully, new and advanced ways for us to watch and enjoy great movies and great TV.