To Be a Market Leader, Focus On The Customer Experience, says Forrester Analyst

Harley Manning, a customer experience analyst for Forrester Research and co-author of the book Outside In, said at our annual innovation summit this past February that what used to be good before is just average now.

Ok, but how does this help you and the business you run?

Being good in business yesterday is just table stakes today.

Manning and the staff at Forrester are numbers crunchers. They are very scientific about what it takes to be a leader today. Through multiple studies, surveys and interviews with thousands of customers, Manning and his team found that what was considered an outstanding customer experience back in 2007 is considered just ‘good’ today. That’s just a short span of 8 years!

But what are the types of customer experiences you need to deliver today if you want to really stand out?

Manning said there are three dimensions to the customer experience:

But which of these dimensions has the biggest impact on customer experience?

After performing a sophisticated regression analysis across 17 industries, Manning and team were surprised at the results. It turns out that emotion is the most important factor.

Referring to a statement made to him by his colleague Megan Burns, principal analyst at Forrester, Manning said:

And even more surprising was that the industries with higher numbers skewing to the emotion dimension were financial services!

But the results got even more interesting.

Manning said Burns looked at 25 drivers contributing to the emotion factor across 17 industries, and the three drivers that seemed to consistently make it to the top of the list were:

Manning broke it down for the audience.

This is what, as it turns out, customers want most in an experience from a company they do business with. What customers really want is to feel valued. They want to feel appreciated.

Manning referred to the ground-breaking finding from a study of why people volunteer for the American Cancer Society’s Relay for Life events. The volunteers have lots of things they could be doing other than volunteering, and walking, and getting blisters, and raising money, but they choose to volunteer – because they feel valued.

Manning said this wasn’t a surprise, but it did come as surprise that it was this important. And “quickly” was the key word here.

What better analogy could Manning give than air travel? He compared his nightmarish experience with one airline that had canceled a connecting flight, taking more than one hour for them to resolve the situation.

It was only an hour, but as Manning said: “…that was an hour of misery that I would loved to have had back in my life.”

Now contrast that to the way Delta Airlines drives loyalty through the flight cancellation feature in their app. Manning noticed that Delta's scores were going way up in their Customer Experience Index, and after some research they zeroed in on the app. 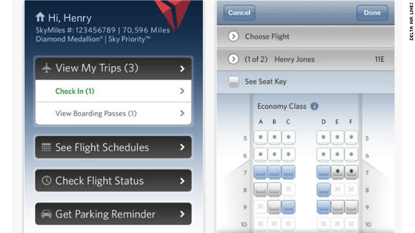 With the flight cancellation notice you get an option for the next three flights you could take instead. You can tap one of the flights, get schedule details, and with a quick additional tap you rebook.

The Delta app really came handy when Manning was stranded in Minnesota in the middle of winter. The app helped him identify a connecting flight to Dallas, and he booked it. All in under two minutes.

Manning again: “So the punch line on this one was about six months later, I had to take a flight to Beijing, and I was looking at my options, and I said fly on Delta. So after that one bit of service recovery, that value of my time got them a five-thousand-dollar ticket six weeks later.”

3. Talk to customers in plain language

According to Manning, this one was really fascinating as he never guessed it would have been so important. This is the Warren Buffet model. Buffet doesn't invest in anything that he doesn't understand. That’s why he doesn't go out and buy tech companies.

Customers are reluctant to buy stuff they don’t understand either. But the funny thing is, said Manning, this is violated constantly. Look at a bank website and how they discuss an equity line of credit.

What does this mean?

But as Manning said, this is fixable, and doesn't require a lot of investment - just determination. “If people push back on stuff like this, just remind them that when consumers hear terms like prime, they’re thinking Amazon Prime, or maybe they’re even thinking Optimus Prime,” said Manning.

Customer experience is something you have direct control over. You have control over how you make your customers feel, the speed with which you resolve critical issues, and how you communicate with them.

How do you do this? In a nutshell, according to Manning, you must:

Softtek is helping corganizations deliver innovative ways to interact with their global customers. Find out about User Experience (UX) services.