The Many Languages of Nearshore

When evaluating the advantages offered by nearshore BPO, buyers often consider that in addition to the widespread Spanish fluency found in the nearshore region, a relatively high rate of English 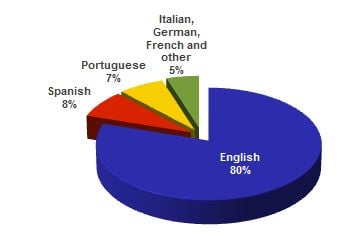 proficiency is also common. But the nearshore region features high and even native degrees of fluency in many languages beyond Spanish and English. Let’s take a quick review of some of the languages commonly spoken in the nearshore area, starting with Costa Rica as an example.

But Costa Rica offers more than English and Spanish in its language proficiency arsenal. According to figures released in 2011 by the private non-profit group CINDE (Costa Rican Investment Promotion Agency), at least six major global languages are spoken by significant portions of its services sector. Eighty percent of the sector conducts transactions in English (likely reflecting the many multinational companies opening delivery centers in Costa Rica), while 8% conduct transactions in Spanish and 7% conduct transactions in Portuguese, another popular Latin American language which is also the official language of Brazil.

However, CINDE figures also show that 5% of the Costa Rican services sector conducts transactions in languages including Italian, German, and French. While the widespread use of other global languages like these (Costa Rica and many other nearshore countries also feature sizable populations fluent in various indigenous tongues) in the nearshore region is less publicized, it is a factor worth considering.

The term “nearshore” applies to Caribbean nations and even Canada, as well as Latin America. The widespread usage of French in the Caribbean (and Quebec), as well as the predominance of English in the many former and current US and British territories in the Caribbean, is heavily publicized. But less publicized is the fact that many Caribbean nations, as well as the South American country of Suriname, feature Dutch as a primary language, or that several mainland South and Central American countries officially speak English or French.

In addition, various historical factors have led to widespread fluency of certain languages in certain nearshore countries, such as a substantial Japanese and Chinese-speaking communities in Peru, Italian-speaking community in Argentina, and concentration of German-speakers in Brazil.

Spanish is Important Language in US

In one final note, US companies evaluating nearshore BPO should also keep in mind that although English remains the dominant language spoken in the US (despite popular misconceptions, there is no legal “official” language of the United States), at least 12% of the US population speaks Spanish at home, and Spanish fluency can be a major asset for companies doing business in certain regions or with certain populations of the US.

For example, in a recent BPO Outcomes article I highlighted how outsourcing calls relating to health concerns from Spanish-speaking customers in the US to Spanish-speaking  call center employees working for nearshore providers, health insurance provider Aetna greatly improved compliance among Spanish-speaking policyholders living in the US. Thus depending on what regions of the world in which they do business, companies considering nearshore BPO should research language and cultural traditions of specific nearshore countries, and make sure they are fully aware of the language and cultural traditions of their own countries, as well.