The Importance of Quality Standards in the Nearshore - Part 2 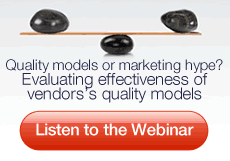 In my last post we talked about quality standards for work performed for US clients in Latin America. We saw why, especially for very complex high-end IT functions, those clients feel much more secure if their provider has international certifications in place. And we saw that Latin America does lag behind other regions like India in implementing quality standards. Part of this is due to the pace at which the Nearshore market has grown, but as Latin America matures, quality standards are critical in order to sustain that growth.

One of the points that was brought up in my chat with Jane Siegel of Carnegie Mellon University a few months ago, was that the lack of these quality standards could be a significant enough factor to lose the region’s market share in the coming years.

It really is all about making the client feel comfortable sending their business to Latin America. “When a buyer is looking for a Nearshore solution, if they want a high level assurance of quality, they’re often willing to pay the higher price,” says Siegel. “The alternative is going with a midsize or smaller homegrown LatAm service provider. That provider might have very talented people, but if big clients can’t mitigate their risk by seeing proper quality standards put in place through certifications, they’ll be less inclined to take their business there.”

It’s important to note that Siegel doesn’t ignore the potential of Latin American companies. The Nearshore region has many promising young start-ups, who all have strong value propositions for US clients. But there is a limit to the amount of ‘big business’ they can receive, simply because big clients want quality assurance.

So why has Latin America (with some notable exceptions) been unable/unwilling to implement quality standards? What are the obstacles that stand in the way? The main issue is the expense that the company has to absorb to implement quality standards, which often seems unnecessary to a growing company. According to Siegel, Latin America is several decades behind in standards certifications, mainly because that movement started in India in the 1980s. And in the last five or six years, the Chinese government has been subsidizing the cost of certification for many companies there. In other words, there is a key role for the public sector in Latin America, to help firms with these expenses.

The second main obstacle is that decision-makers on the supply side are still not convinced that that quality standards could really generate their company additional business. And it’s a hard thing to prove, because there are many factors in play. But the point is, when clients can remove some of the inherent risks of outsourcing, they’re much more open to partnering with a vendor. Increasingly we’re seeing that they don’t mind paying extra for that security.