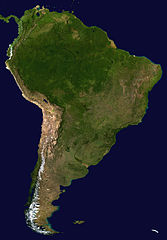 countries were among both the biggest gainers and losers in Tholons’ rankings this year, which the report attributed to improving traction in some nations in the region while “lingering adverse risk conditions” continue to impair outsourcing growth in others.

Let’s drill down and look at what Tholons had to say about the current state of outsourcing in several key South American nations.

Colombia on the Rise
Colombia is a rising power in the outsourcing market, with two cities – Bogota (49th) and Medellin (53rd) among the fastest movers on the top 100 cities list. Tholons credits “unwavering support” from local industry and government to promote Colombia as a viable global ITO and BPO destination, as well as collaboration between Colombian service providers and large Western companies to set up operations there, as helping fuel Colombia’s outsourcing growth.

Uruguay – Small but Steady
Uruguay is a small nation (about 3.3 million inhabitants) but its capital city and largest metropolitan area Montevideo ranked 37th on the Tholons top 100 list, up six spots from 2012. Tholons says Uruguay is an established provider of ITO services and offers a “safer, more predictable” alternative to better-known regional outsourcing destinations such as Argentina and Brazil. Uruguay’s outsourcing industry also has strong support from local business and government, although most services are based in Montevideo.

Show Me the Way to San Jose
Tholons considers the Central American country of Costa Rica as part of the South American region, and the Costa Rican capital of San Jose jumped five places to 13th on the Top 100 list in 2013. Aggressive promotion by CINDE (Costa Rican Investment Promotion Agency) is credited as helping to buoy interest in Costa Rican outsourcing services. Costa Rica is also noted for offering a high degree of fluency in numerous languages.

Brazil Loses a Step
Conversely, Brazil, which with close to 200 million residents is the largest country in South America and fifth-largest country in the world, saw its outsourcing hubs of Sao Paulo (18th) and Rio de Janeiro (38th) slip in the rankings from 2012. Tholons blames rising labor and ancillary costs, as well as labor union-related difficulties such as strikes and mandatory wage increases, for hampering Brazil’s outsourcing growth. Tholons also warns that an impending law which would require overtime pay for employees using portable communication devices outside the office will further drive away outsourcing buyers.

Politics Complicates Argentina Outsourcing
Argentina is another major South American nation which saw a dip in its outsourcing ratings this year. Capital Buenos Aires fell to 24th in the overall rankings and is no longer a part of the Top 10 Emerging Cities list. Political issues and inflationary pressures are motivating outsourcing clients to look elsewhere.

In one good piece of news for South American outsourcing as a whole, Tholons says buyers are looking elsewhere in the region when they seek alternatives to established local powerhouses Brazil and Argentina.