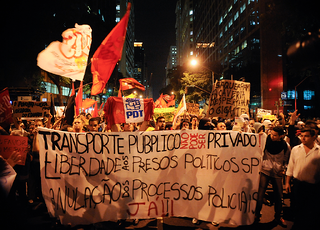 The month of June marked a very special moment for Brazilian society: protests spread across hundreds of cities all over the country.  Voices from the Southernmost State of Rio Grande do Sul to the Northern region of the Amazon made it clear that Brazil citizens want things to change - for the better. And the Internet echoed their claims.

The demands are extremely diverse, which makes the issue and its origins hard to classify – no less resolve. Better public transportation, education, improvement of the conditions of the public health care system and the end of corruption all were part of the rallying cry. Social media networks, especially Facebook and Twitter, played a major role in spreading the voices of protest. These platforms were also used effectively to organize physical gatherings.

Twitter hashtags such as #ChangeBrasil, #AcordaBrasil and #ProstestoSP were among some of the most mentioned during key hours at the height of the protests on June 17th, according to data compiled by the local tech consulting firm R18. The terms "manifestation", "protest" and "vinegar" (an item carried by some protesters to protect themselves against teargas used by the police) were used in over 30,987 posts just that day, R18 reports.

An interesting graph compiled by the company shows that protest tweets peaked at around 8p.m. when most of the users were in the streets. At that time, 3G mobile networks were virtually at capacity and crawled to a standstill in the heart of São Paulo, in areas where the service normally has no issues. In that same hour, R18 counted 14,417 tweets commenting on the protests. From the tweets counted that day, 184 of them were sent by @MCCNacional, initials that stand for “National Movement Against Corruption” in Portuguese.

core criticisms of the protesters. Big Data tools, for example, are seen as a way to potentially create more transparency and accountability in procurement of technology solutions in the public sector. “O Globo” newspaper reported that out of 40 federal government agencies, only one (Ministry of Education) uses Big Data tools and systems to execute public purchases. Since 2008, the Education Ministry has saved R$ 1 billion of public money (about half a million US dollars)  just by using Big Data for new public acquisitions.

According to O Globo’s report, the tool performs market research before the execution of public purchases in a series of different official databases throughout the country. That way it can identify where a school bus –for example – is most in demand at a certain moment, and where it can be bought for the cheapest price.

There are discussions developing where a central agency, such as the Planning Ministry (Ministério do Planejamento), would use such tools to make sure greater numbers of public agencies modernize purchasing systems.

Technology is in fact one of the bright features of the new Brazil. It’s a tragedy not more is being mentioned about its transformative potential in Brazil society.