Smartphones Change the Game for CIOs

The continuing proliferation of smartphones is changing the game for CIOs. Your employees and customers are most likely connecting to the Internet via smartphone or other mobile device, 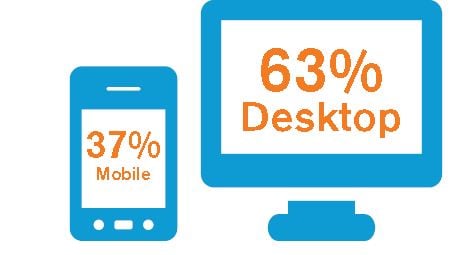 meaning both internally and externally facing solutions must be adapted and optimized for mobile access.

According to a recent report from comScore, “Mobile Future in Focus 2013,” more than 125 million US consumers have smartphones and more than 50 million now own tablets. As a result, comScore says there is a “new paradigm of digital media fragmentation where consumers are always connected.”

In addition to increased mobile device ownership, the improved availability of high-speed mobile Internet networks (such as 4G and LTE) is also spurring higher levels of mobile device usage to the point one of three minutes of Internet time consumed in the US is consumed via mobile device. In fact, the number of 4G users increased 273% between 2011 and 2012, to 33.1 million. And of course, consumers are also employees.

Taking Advantage of the New Mobile Paradigm
Naturally, anytime there is a significant technology paradigm shift it creates major headaches for CIOs. However, CIOs who recognized the opportunities and prepare the groundwork can significantly benefit from a world where customers and employees expect optimized mobile access. Following are a few suggestions for CIOs looking to maximize the return they can get from adapting to the new mobile landscape.

Extend Your Reach
More platforms mean more complexity, but also mean CIOs can extend the reach of the organization, both internally and externally. Internally, optimizing the enterprise for mobile access greatly enhances the possibility for employees to work remotely, which can result in lower overhead costs as well as more effective performance by employees in the field. Of course, CIOs must ensure they have taken adequate security precautions before opening the enterprise to employees with mobile devices, especially privately-owned devices (the “BYOD” phenomenon).

Touch Your Customers Wherever They Are
Externally, by opening customer-facing parts of the enterprise (such as websites, portals and physical interaction spots) to mobile devices, CIOs allow the company to do business on a much wider scale. Whether your enterprise is B2B or B2C, it serves some sort of customer base, and allowing that base to do business and conduct transactions from wherever they happen to be will almost inevitably increase revenue. Of course, extra security precautions are also needed to ensure secure transmission and storage of customer data, financial information, etc.

The Right Device at the Right Time
CIOs looking to mobile-enable the enterprise for either employees and/or customers should educate themselves about device usage patterns. For example, comScore research shows that desktop PC usage peaks during the workday and early evening hours, smartphone usage is highest during heavy commuting periods, and tablet usage spikes in the late evenings. Armed with this knowledge, CIOs can tailor channel-specific services and also allocate additional resources based on when the most people are likely to use a specific channel.