Like early digital computers, quantum computers offer the possibility of technology that is exponentially more powerful than current systems. They can change businesses, entire industries, and the world by solving problems that seem impossible today.

Although progress has been amazing in recent years, quantum computing is still in an experimental phase. However, according to the latest research, by 2023, 20% of organizations will budget for quantum computing projects.

Experts estimate that by 2025 they will already be able to generate $780 million per year in revenue and cost savings for all industries that decide to invest in it. As this technology advances, the savings will increase and it is estimated that in 2050 this figure will reach values between 450,000 and 850,000 million dollars per year. 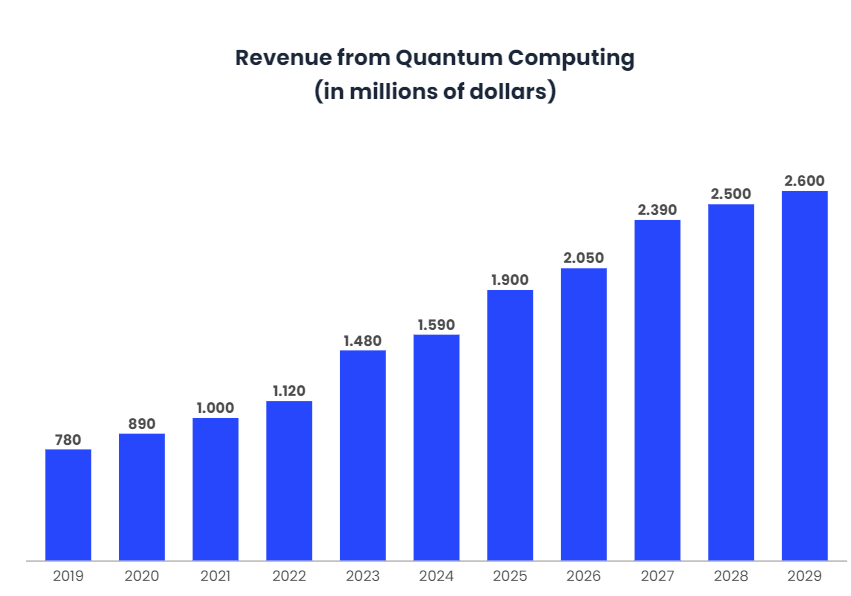 How does it really work?

It is important to define beforehand that quantum computing is a theory about how to build computers. In short, quantum computing a computer uses the quantum superimposition of particles to store data just like a bit does in a classic computer. Qubits, as they are called, exist in an indeterminate state (1 and 0). This means they can be 1, 0 or both, because the universe has not yet decided which one it wants to be.

This allows several calculations to be performed at once by exploiting the overlaps of these qubits, opening the door to solving problems that may require hundreds, if not thousands, of years to solve using a classic computer.

However, quantum computing is an exceptionally delicate thing since maintaining a quantum particle suspended in an overlay can only be done for about 100 microseconds. In addition, it also requires extremely cold and superconducting temperatures.

This kind of hardware makes quantum computers highly specialized equipment that are only really practical for very specific tasks at this time, such as predictive modeling and optimization problems in complicated systems with a large amount of variables.

How will this be achieved?

Quantum computers promise to solve real-life problems that are beyond the possibilities of classic computers. The computational power of this technology is based on a completely different set of rules.

These different computing rules also mean that traditional programming languages cannot be used to unleash the power of quantum computers so new languages are required.

Quantum languages have existed since before the emergence of real quantum devices, as they were used to simulate quantum algorithms in traditional computers. With the construction of real quantum computers, each research group and company has developed its own language to use in its devices.

This has motivated the creation of more languages that try to join some elements of the existing ones and whose objective is to be used in any backend, they are known as universal quantum languages.

The creation of these more general languages is possible because almost everyone is developing open source software, that is, anyone can contribute to the improvement and extension of these languages using platforms that offer hosting for software development.

There are currently several quantum programming languages (e.g. Matlab, Fortran, C.) however, quantum languages are still under development, as are quantum devices.

Another way to get involved is to join the effort to develop standards related to quantum computing. Technical standards accelerate the development of a technology, introduce economies of scale and grow markets. The development of quantum computer hardware and software will benefit from a common nomenclature, for example, and agreed-upon metrics to measure results.

Like any technology in its infancy, quantum computing, and therefore quantum programming languages, face a number of challenges that can hinder their evolution.

A major concern when running quantum programs is the appearance and accumulation of errors. The longer quantum hardware runs, the higher the error rate. Therefore, it is important to understand how error correction can be made. In this situation it would be very useful if the analysis were done automatically. While there are different types of analysis, there is one that stands out because of its importance, and that is the one that evaluates the uncertainty coming from each line of code.

On the other hand, it is important that experts have the accumulation of errors at a tolerable level. For this purpose, it would be important to have reference points to be able to develop optimizations, which allow to solve those failures in an organic way and without delays in the development.

Finally, debugging is another issue to pay attention to, it is a very difficult aspect to solve in quantum programming languages, as there are no control points available for it so far.

The economic advantages are obvious, however, and they are not the only ones. The most important benefit of quantum computing lies in industries that need simulations to solve complex operations, which require superior computing power that a typical computer cannot offer.

Although it seems that only large companies in the technology sector are interested in this technology, it is increasingly common for medium-sized companies to experiment with quantum computing for their benefit.

Quantum computers are not intended to replace processors in personal computers or smartphones in the short term. For the most part, quantum computers will be best suited to address optimization problems, identify patterns in data, and perform complex simulations that would be too demanding for traditional computers.

These problems will drive the global market for enterprise quality control. But quantum computers have not yet demonstrated supremacy or quantum advantage. Significant scaling of processing power, improved error-correction capabilities, and writing and refining of the quantum programming language will be required before businesses adopt mass quality control.