North American companies show strong interest in outsourcing this year, according to the 2012 KPMG/Equaterra Sourcing Advisory Legal Pulse survey. Results of the survey, which examines 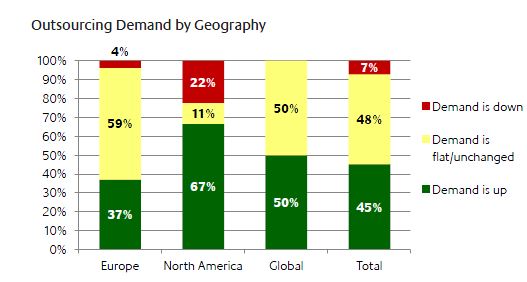 North American BPO Buyers Seek India Alternatives
Also of great interest to nearshore BPO providers are survey results indicating North American companies are interested in alternatives to India and pulling back from global sourcing. On a scale of 1 to 5, with 1 equaling “strongly disagree” and 5 equaling “strongly agree,” North American respondents rated their level of agreement with the statement “Buyers are growing more interested in offshore services delivered from locations other than India” as higher than 4. Total respondent agreement with this statement was between 3 and 4.

Nearshore Providers Must Play Up Strengths
The North American interest in outsourcing is clearly present and strong, and there is high demand for many of the helpdesk- and IT-related functions which so many nearshore BPO and ITO providers excel at delivering. However, nearshore outsourcing providers can hardly expect to sit back and wait for North American clients to come knocking on their doors.

Traditional BPO strongholds such as China, India and the Philippines, as well as emerging competing destinations such as Eastern Europe and Southeast Asia, all offer North American customers tempting options.

Therefore, nearshore outsourcing providers must not be shy about playing up their relative strengths to prospective North American clients. These include:

IP Protections. Latin American governments have come a long way in establishing a firm “rule of law” in recent years, and today most of the major countries in the nearshore outsourcing marketplace can offer IP protections and other legal and security guarantees at a level at least equal to and likely exceeding those offered by dominant players such as India and China. BPO buyers are generally wary of the protections in place in these nations, as evidenced by survey results showing that 88% of all respondents said China’s new data privacy guidelines have a neutral impact on its appeal as a sourcing location (results to this question were not broken down by geography), and 78% said India’s new data privacy guidelines have a neutral impact.

Time Zone. Nearshore outsourcing providers operate in the same or similar time zones as their North American clients. As a BPO buyer, this means no dealing with night shifters during your working day or having to get up at 3 AM to reach a top manager.

Language & Culture. Most nearshore countries offer high degrees of English fluency (some even feature English as a native language), and Spanish is widely spoken in the U.S. as a second or even primary language. Nearshore countries also have cultural norms similar to those of the U.S.

Affordable Travel. Traveling to Latin America or the Caribbean is not necessarily cheap or fast, but certainly less taxing on precious financial and time resources than traveling to Asia or Europe.

The trends show potential for increased nearshore outsourcing, now it’s time for that potential to be developed into actual results.