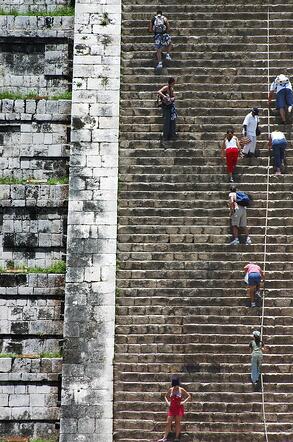 Oh, down in Mexico
I've never really been so I don't really know...

For those unfortunate people involved in outsourcing decisions who have never made the trip to Mexico, like the guy in the James Taylor song quoted above, there's a new report you should check out. It's called Going Global: The 2012 Investor's Guide to Mexico's Business and Technology Services, and it rounds up the kinds of key information anyone reckoning with sourcing locations would find helpful. It's also relatively free of the MBA-speak that makes so many reports like this so god-awful to read.

(Full disclosure: The folks who produced this report have been colleagues of mine, but they don't even know I've read this report.)

I'm going to mention just a few highlights that jumped out at me, but I encourage you to download the report. Mexico, after all, has emerged as the world's fourth largest producer of IT services, after India, China, and the Philippines, according to Gartner, and deserves deeper investigation by more businesses.

The "Going Global" report mentions some of the things that Mexico has done to get where it is today. Public and private initiatives have been part of the formula, but there is much more to be done, especially in states where education is poor and employment opportunities scant.

Mexico, like the rest of the nearshore region, has a chance to cash in on the IT areas where growth is expected – mobile apps, social media, cloud services – but, as the report's author Luke Bujarski warns, "Mexico’s IT services providers will have to ensure that their technical and creative capabilities keep pace with the rapid proliferation of these technologies." Scalability is an issue here.

There's another factor working against Mexico in the rapid world of IT: The work culture "remains
conservative and more risk averse than in countries like Chile and the United States," the report points out. "Professional failure (but not from a lack of trying) is frowned upon. which pushes professionals away from new companies and/or starting new companies, and more toward higher-paid positions with locally established enterprises." It seems that graduates of the finer schools are seeking stability and good wages, which are not always guaranteed in a startup that's doing the more interesting kinds of IT work out there today.

Like agile development. Because agile projects benefit from providers and clients working together in real time, Mexico is in a perfect (geographical) position to work with businesses in the region that want to implement an agile development approach.

Although the World Bank says the global economy will grow only 2.5% this year, things might be brighter in Mexico because its "economy has remained more stable with regard to core inflation, GDP growth, excessive expansion of credit, and current account balance."

But on the other hand, the World Bank ranks Mexico as a relatively difficult place to do business, with Mexico City the worst offender in the country. The report emphasizes that Mexico is a big country, and its outsourcing destinations are not homogenous. (Spend some time with anyone who owns a business in Mexico City and you will see why the more interesting and innovative IT companies are headquartered in Guadalajara or Monterrey, for example.)

Make note of these secondary sourcing cities: Aguascalientes, Queretaro, Hermosillo, and Tabasco. They "are recognizing the potential and promise of global services as an engine for economic growth, as well as a pathway towards a higher-value, knowledge-driven economy." The report provides handy snapshots of key locations.

All the talk in the U.S. about outsourcing jobs has occasionally pointed a spotlight on Mexico, and Bujarski warns that even though much of the political talk is "toothless," things like the U.S. Call Center Worker and Consumer Protection Act "should be monitored closely by Mexico's sourcing community."

And the security situation? Anyone who has hesitated to consider IT or BPO services from Mexico needs to read the section addressing this sensitive but crucial concern.

Trust me, the Bujarski report is a million times more interesting than this post. But as always, don't take my word for it. Download a copy, and browse through it the next time you're stuck in the airport. You might eventually arrive at the same conclusion as the guy in the James Taylor song.