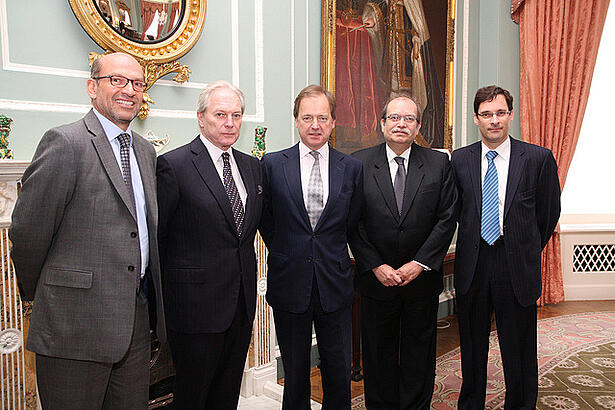 Image by Foreign and Commonwealth Office.

Regional economic integration in Latin America has been much talked about for decades, but precious little progress has been made to date. Intra-regional trade only represents 27% of total trade in Latin America, compared with almost 63% in the European Union and 52% in Asia. Lack of regional trade is a huge economic handicap for all Latin American nations, but the new free trade-centered Pacific Alliance between Chile, Colombia, Mexico and Peru is a critical first step towards an integrated regional economy.

Preliminary talks on the formation of a true Latin American trade zone have been held sporadically among various nations for the last 20 years, but it is only in the second decade of the 20th century that the political will emerged in Chile, Colombia, Mexico and Peru to make it a reality. The presidents of Chile, Colombia, Mexico and Peru signed the documents finalizing the creation of the Pacific Alliance on May 23rd of this year, but the negotiations had been going on since 2009, and were formalized in 2011.

The free trade and open borders premises of the Pacific Alliance have attracted a good deal of praise internationally, including from the US, Canada and the EU. The idea of an economically synergistic free trade zone is also popular throughout Latin America, and Panama, Costa Rica and Guatemala have all expressed interested in joining the PA.

The Pacific Alliance was developed based on the long-held idea of  “open regionalism". That is, first create a deep regional market to create economies of scale, which will in turn make it easier to join the global economy as an equal competitor. The first step in the free trade process came with the May signing of an agreement removing tariffs on 90% of the merchandise trade between member states, and phasing out tariffs on the remaining 10% over the next seven years.

The other benefit of this kind of cohesive economic alliance is the streamlining resulting from cutting through the maze of national regulations and establishing a single set of standards.  This type of exercise in regulatory convergence creates efficiencies for all parties and makes all parties more attractive trading partners.

Mercosur is perhaps the most well known trade organization in Latin America, and includes Argentina, Brazil, Uruguay, Paraguay and Venezuela and  Bolivia. Mercosur, however, became highly politicized shortly after its founding in 1991, and has never produced a real, wide-ranging free trade pact among its partners.

Per Mercosur's charter,  it's mission is to create a continent-wide free trade zone, but constant infighting among members, especially Brazil and Argentina, has limited progress on free trade negotiations (both within Mercosur and with the US and EU). Mercosur did establish a parliament in 2006, but it is strictly an advisory body with no budgetary or enforcement powers.

According to researcher Barbara Kotschwar, “While Mercosur represents 21st Century socialism, the Pacific Alliance is more of 21st Century capitalism, which is taking a more pragmatic approach toward economic development incorporating elements of social inclusion as well as liberal economic policies."

Given the current Pacific Alliance represents 215 million people and 39 percent of Latin America’s GDP, it only makes sense for the U.S. and the EU to consider some type of free trade agreement with this significant regional alliance, especially given the pro-market bent of the organization.

According to a number of analysts, including Ms Kotschwar, the pragmatic. nuts-and-bolts, nonpolitical character of the PA means it has a much greater chance of eventually inking FTAs with major partners than past efforts such as Mercosur's highly-politicized Free Trade Agreement of the Americas (FTAA).