Mexico Investing $315 Billion in Infrastructure through 2018

Privatization and less regulation has led to infrastructure in Mexico improving by leaps and bounds over the last two decades, particularly in the telecommunications, railroad and airport sectors. That said, there has also been great growth, so the demands on infrastructure have also increased dramatically. Furthermore,  some sectors, such as water, energy and roads, have only seen limited improvements, and their lagging behind is a drag on continued economic expansion.

The 2012-2018 New Infrastructure Program offers new initiatives in all infrastructural sectors, but some critics argue that too many of the programs are focused on high-profile projects such as airports, ports and high-speed rail lines, and not enough  on basic infrastructure such as water and roads.

Mexico has over 1800 airports, but less than 20% of them have paved runways and 35 of the airports account for 97% of the passenger air  traffic. Although modernized somewhat in the last decade or so, the port system in Mexico is still largely antiquated. Veracruz is really the only major port in the country, with Ensenada in Baja California coming in a distant second. Expansion and improvement of airports and ports, including a showcase project to turn Veracruz into a world-class port facility, is a central goal of Peña Nieto's New Infrastructure program. 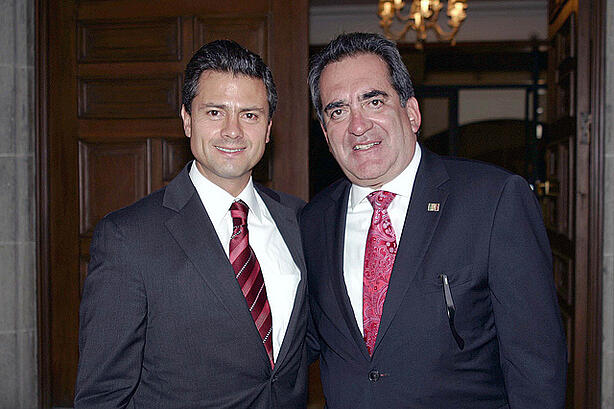 Several major airports, as well as Manzanillo, Tampico and several other ports are also slated for improvements.

Despite an extensive 20,000-mile railroad system, less than  20% of land-shipped goods in Mexico travel by rail. This is largely because of chronic maintenance and management problems resulting in trains constantly running behind schedule.  There have been some gradual improvements resulting from the privatization of Ferrocarriles Nacionales Mexicanos in 1999, but there is still a lot of room for improvement. Railroad-related infrastructure is another key focus area of the current infrastructure build-out, and the 2012-2018 NIP calls for expanding the Mexican railway system by almost 1,500 km, including several controversial high-speed rail projects.

Telecom infrastructure in Mexico has improved significantly in the almost 15 years since the privatization of Telmex in 1999. Reliable cell phone service and broadband Internet are common in all of the major cities today, and cell phone service is expanding rapidly into more rural area. Improvement of broadband access is one the top priorities of the NIP, and two new initiatives are being introduced as part of the program.

Mexico has over 120,000 kilometers of paved highways, but only around 90% meet international standards as road maintenance remains a major issue.  Over 80% of land-shipped goods in Mexico travel by road. The last two decades has seen a spree of private toll road building in Mexico, but graft and mismanagement of many of the projects has led to high toll prices and relatively low usage of the toll roads. The federal government has had to step in to support the construction companies involved in several cases. Plans outlined in the NIP will add significantly to the highway system over the next five years.  The states of Jalisco, Oaxaca, Veracruz, Michoacan, Queretaro, Puebla, Tlaxcala and Estado de Mexico are likely to see the most new road projects under the current NIP.