Mexico and China Breaking Down the Great Wall

There has been a notable thaw in the once-chilly relationship between China and Mexico over the last few months. Although Costa Rica remains the only country in Central America to maintain diplomatic relations with China, the relationship between Mexico and China is clearly improving, as evidenced by Chinese President Xi Jinping's three-day visit to Mexico beginning Tuesday.

President Xi Jinping's visit to Mexico is part of a four-nation regional tour, including Trinidad & Tobago, Costa Rica and the U.S., and marks the first time in two decades a Chinese leader has visited Mexico.  Although not traditionally close, Chinese-Mexican relations soured considerably in 2011 when then President Felipe Calderon hosted the Dalai Lama.

China has made a major pivot to Latin America over the last seven or eight years as part of their global push for commodities and strategic raw materials. Several other  Latin countries, including Venezuela, Brazil, Argentina and Costa Rica, already have significant commodity-related partnerships with Chinese companies, but China has a very small economic footprint in Mexico. This is largely because Mexico and China have traditionally been  competitors  in supplying the U.S. market with manufactured goods, and Mexican companies have fought tooth and nail to keep the Chinese off their turf. 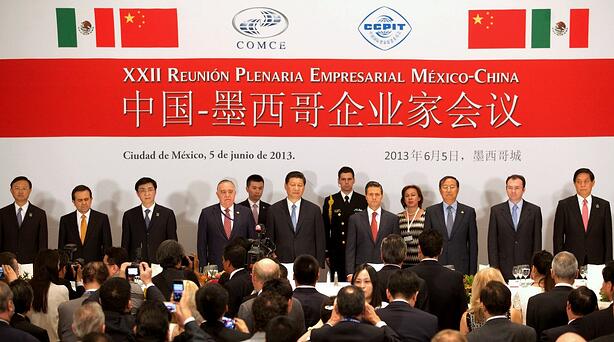 The current economic relationship between the two countries is completely one-sided, with Mexico importing $57 billion worth of products from China, but only exporting $5.7 billion to China. This huge, highly negative bilateral trade balance was part of the reason incoming Mexican President Enrique Pena Nieto decided to begin a thaw in Mexico-China relations.

Pena Nieto was just inaugurated six months ago, but he made a trip to visit China a high priority for his administration. He returned from his April visit with a list at least a dozen potential deals with Chinese companies in the energy, tourism and science and technology industries.

Xi Jinping has returned the favor by coming for a visit to Mexico less than three months after beginning his tenure as president. There is no question that the diplomatic pas de deux between the two is just a cover to get the economic ball rolling and get some business deals done. China needs oil and other commodities, and Mexico needs Chinese industrial and software expertise and has a growing appetite for high-end consumer goods.

Both sides are keeping their cards close their vests regarding just what deals are being discussed, but you can be sure oil is one of the topics of negotiation, especially given that Pemex signed its first ever long-term contract with a Chinese oil company during Pena Nieto' s April visit. Most analysts hypothesize that a number of additional deals will be inked by the end of Xi Jinping's  trip to Mexico, with deals in coal, copper, lead and specialized electronics for smartphones all distinct possibilities.

Gradual Improvement in Relations Is a Reasonable Expectation

China-Mexico relations are not going to become rosy overnight. There is a great deal of resentment and suspicion to be overcome on both parts, especially in the manufacturing and retail sectors.  The controversy surrounding  the building of the Dragon Mart retail complex, a $1.5 billion commercial-retail project largely bankrolled Chinese investors in  Puerto Morelos over 1200 miles south of Mexico City, is a good example of the problem. This huge development is designed to be a trade platform through which Chinese goods will be supplied to all of Latin America, as well as a resort to attract Chinese tourists as it is just 25 miles from  the major tourist hotspot of Cancun.

Dragon Mart, however, has prompted resentment and criticism in Mexico,  where the leading business associations as well as academics and environmental groups have voiced objections, arguing the goods sold in the shopping complex are subsidized by the Chinese government, and that it will increase smuggling and the sale of counterfeit products, as well as having a very negative environmental impact on the area. Plans and initial construction prep for Dragon Mart continues pace, but there are legal challenges in the works.