Improving Your Department's Perception with ITO

Corporate IT appears to be facing a bit of a perception problem. Or perhaps more accurately, significant gaps in perception of the role corporate IT plays that exist between IT providers and 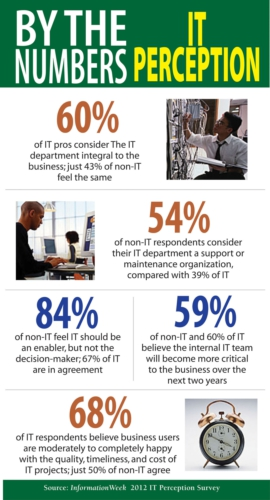 end users suggest that the IT department needs to educate the rest of the enterprise on the reality of what they do.

The Numbers Don’t Add Up
As illustrated in the accompanying infographic, results of the InformationWeek 2012 IT Perception survey which polled 246 IT and 136 non-IT professionals (382 total) determine how IT is perceived in the enterprise reveal a significant gap between IT's perception of itself as reasonably innovative and effective, and non-IT's decidedly more lukewarm view.

For starters, even as businesses now routinely tech-enable virtually every process, only 43% of non-IT professionals consider IT “integral to the business.” Even the 60% of IT pros who express this opinion seems like a low number when you look at how much of modern business operations is completely dependent on IT.

Given these figures, it is not especially surprising that 54% of non-IT respondents consider their IT department a support or maintenance organization. But the 39% of IT professionals espousing this view seems high.

A large majority (84%) of non-IT respondents think IT should be an enabler but not a decision-maker. A solid two-thirds (67%) of IT professionals agree, which may reflect harried IT professionals’ desire to stay “under the radar” and do their jobs without any more added pressure from being “the boss.”

One of the most interesting disconnects is that 68% of IT respondents believe business users are moderately to completely happy with the quality, timeliness and cost of IT projects. A mere half (50%) of non-IT respondents (i.e., actual business users) agree. This large and crucial gap showcases the extreme siloing of IT in many organizations, leading to poor or non-existent communication with the business users.

Despite the many perception gaps between IT professionals and their core customers and relatively poor grades given by end users to their IT departments, the two survey groups are in agreement about the growing importance of IT. Sixty percent of IT professionals and 59% of non-IT professionals believe the internal IT team will become more critical to the business during the next two years.

How ITO Can Improve Perception and Provide a Taste of Reality
CIOs facing this kind of perception gap with the end users may want to investigate ITO as an option for closing the perception gap and bringing end users (and maybe even their own staff)  to the realization that today’s IT department is a critical driver of innovation and profitability at most businesses. Part of the perception problem is likely caused by the fact that even as IT departments tackle increasingly complex and strategic projects, they are also still stuck performing routine maintenance and other low-level tasks.

Outsourcing the small stuff saves money and also frees up human resources to devote more time and attention to executing the big stuff and also communicating with end users. At the other end of the scale, selective use of ITO resources to provide highly specialized expertise when needed can help make the difference between success and failure in dealing with leading-edge technologies activities such as social media and mobile. Whether perception is accurate or not, it often winds up dictating reality. CIOs need to ensure the internal perception of the IT department is a dictator of the most benevolent sort.