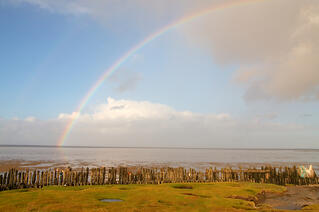 The latest round of layoffs announced the other day by HP was not surprising. Sadly, huge job cuts are almost an annual ritual at the company, where a glorious past has been dimmed by decisions that some have called questionable.

What was surprising is that the greatest share of the 27,000 (!) terminations will reportedly come from the services division. Sources told Bloomberg that HP could cut the group by 10,000 people, leaving 15,000 saved. It could be HP's opportunity to be the new type of provider we sometimes hear about.

It's not yet clear how many of these cuts will affect HP's nearshore operations, which were on an accelerated path in the past year or so. There has been some buzz that the company is hiring fewer people than originally projected for its new center in Medellin, but that could be a result of prudent hedging against a tenuous global economy.

It's not like HP can't score any big contracts. As recently as March, the Enterprise Services division landed two of the top 10 IT deals in the world for the month: one for $800M with Sabre Holdings for infrastructure services, and one for $500M with SKF for applications development. In fact, HP routinely appears on this largest-deals list (compiled by the contracts analysts at Ovum).

Or you know what? Maybe it's not surprising that the services group would take the biggest whack. Could it be that HP's braintrust is responding to what some observers of the outsourcing scene have been talking about for a year or so now? What they've been saying is that outsourcing customers are now looking for something more from their provider than boring old standard-issue enterprise IT stuff that almost runs on autopilot.

As Robert L. Scheier of Global Delivery Report reported from the recent Sourcing Interest Group summit, "customers are looking to outsourcers to not only save money, but to drive growth, improve quality and drive innovation." They want service providers to "make a more strategic contribution."

Could it be that the HP directors realize now's the time to overhaul the big, unwieldy services behemoth and transform it into a New-Style Services Squad? HP execs say the formerly pioneering company is going to invest more in R&D, according to news reports this past week. I wonder if most of that research money is going to go into nifty new ink-delivery mechanisms or into products and discoveries that would benefit clients of HP IT services. If HP really wants to be in the IT services business, it will have to figure out how to be more than an old-timey provider. Perhaps they now believe that the days of doing things the EDS way are gone.

If HP invests R&D dollars in figuring out how to "make a more strategic contribution" to its IT services clients, then that could mean a new HP services workforce that delivers something more than services – that delivers innovation, or at least surprising solutions. It could make HP the IT giant that figured out businesses need something different now from IT sourcing and adapted accordingly. It would also mean fewer job cuts down the road.