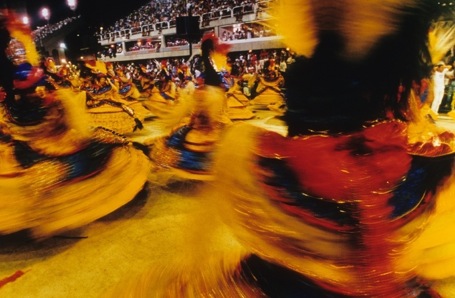 This week Brazilians got to enjoy their annual national party while the rest of us were wishing we'd been born a few miles farther south. People were also partying and parading on the islands of the Caribbean – just not with the epic scale of Brazil's extravaganza.

Besides all the associated fun-based activities, Carnival is also a time for reflection. Not to get all serious, but "the world's biggest party" does hold some important lessons or thoughts for everyone involved in Nearshore outsourcing.

First, every country or culture should have something like Carnival. Human beings – and that includes software developers, project managers, analysts and testers, back-office support staff, help-desk personnel – need time away from the job. Yeah, I know, everyone agrees. But it's too easy to forget this, especially in an extremely competitive business like IT outsourcing or BPO. You can't afford to miss a deadline or deliver something not up to your usual standards.

But you also can't afford to burn out your employees, or chase the really talented ones into the arms of a competitor with a more holistic view of life and work. I'm not suggesting workers should be coddled. The really top-notch employees don't want to be coddled. They just want to know that their manager gives a hoot about them, and understands that along with the 12-hour days and weekend work comes a perk now and again. Giving the team time off to celebrate a national festivity every once in a while is good for the team's mental health and productivity.

The title of this blog post is also the title of a novel by Herman Wouk. (It's also the title of a fantastic song by the great saxophonist and composer Sonny Rollins.) Wouk's story is about a New York public relations man (ok, it's an old book) who wants to flee his hectic life and oppressive career and moves to a small Caribbean island to run a hotel. The novel is kind of frothy, like a well-made daiquiri, but its basic theme is solid: the old culture clash.

I used to live on that very island (Wouk gave it a fictitious name), and even though some of the clashes I saw there were a bit darker and visceral than what he describes (the crime rate had greatly increased since the time he lived there), I was able to see first-hand what happens when a representative of one culture disregards the culture of another.

The operation I worked for had recently been acquired by a gigantic US corporation. Down come a bunch of Americans (that was one of the more polite names for us; I think "baldhead," bestowed by the Rastas, was my favorite) to show the locals how to run the business, even though the founders of the company had been running it successfully for 50 years. I was not part of this imported corporate team but just a regular flunkie, the only non-local on staff at the time. Most of the immigrant managers tried sincerely to accommodate differences between-laid back native culture and uptight East Coast rules and regulations. In fact, some of them had wanted to transfer to "the rock" because of that alluring native culture.

But we had one boss who would not or could not bend his mind a fraction of an inch. When people wanted to take the afternoon off to attend one of the big Carnival events, he said no way. Someone proposed adjusting work schedules, but that was not an option for this man. It's true we were a deadline-driven operation – like a software development team – but all that boss could see was his image of how things are supposed to be done. He was the guy with years of experience and process, and by golly he knew what was right.

I was just a punk kid back then, but even I could see that his lack of appreciation for a different culture was going to be a problem for him, and for the business. This "life be damned" attitude gradually lost him the respect of his workers, and back to the States he flew.

Bosses and employees should not be buddies; that's not what work is about. But the minute you show disregard for something that is important to the individual human being, even if it's something that seems alien to you, the minute you effectively say "My culture is superior and by the way I am paying the bill," you have damaged the loyalty and the eagerness to surpass expectations that makes so many IT services companies succeed.

It's not like a few days of Carnival turns everyone into a party zombie. Everyone I know in Brazil was back at their desk and ready to go on the day after the national holiday. Carnival, after all, is preparation for buckling down and saying no to pleasures of the flesh. It's a time to enjoy before turning back to hard work. It's a time to prepare one's body and mind for abstinence and discipline. (Well, that's the original idea, anyway.) It's a time to revive and charge the batteries. And that's something everyone, no matter what culture they're from, needs to do.

Besides, as this report from Brazil points out: Carnival is a great time to get some business done.