The massive public demonstrations that erupted across Brazil in mid-June were sparked by a regional protest over an increase in public bus fares. These protests were not about the tyranny of a despot as in Libya, Egypt, Tunisia, Syria and elsewhere, but rather boiled up from a simmering anger at inflation eating away at purchasing power and endemic corruption and economic exploitation by the political elites.

Socioeconomic conditions have actually improved significantly in Brazil over the last decade and a half, with over 40 million people lifted out of poverty and the creation of a real middle class. But the Brazilian economy is in currently in a down cycle, with a 6.5 % annual inflation rate rapidly eating away at the purchasing power of this new middle class. This loss of purchasing power, coupled with huge government expenditures on a variety of public works projects leading up to the 2014 World Cup and 2016 Summer Olympics to be held in Brazil, and a perception that the political elite are taking advantage of the situation to enrich themselves, is leading to public discontent.

Brazilian President Dilma Rousseff’s has suffered a steep drop in popularity since protests broke out across this country, according to Brazil’s first nationwide poll since the unrest. Published by Folha de S. Paulo, Brazil's largest newspaper, the recent Datafolha survey reported just 30 percent of respondents rated Rousseff’s government as ‘‘great/good,’’ a huge decrease from the 57 percent giving it that rating three weeks ago before the demonstrations.

Furthermore, the current government’s popularity has plunged throughout the country, including in the northeast where the Workers Party is traditionally strong. Approval rating in the northeast part of the country decreased from 64 to 40 percent. Perhaps most telling, the poll also reported that 30 percent of voters say they'll cast their ballot for Rousseff in the October 2014 elections — a big decrease from 51 percent just a few weeks ago.

It's Not Just About 20 Cents

The catchphrase of the protests -- it's not just about 20 cents -- emerged after a week or so of evolving demands from the protesters.  Like most of the recent spontaneous protests worldwide, Brazil's movement has no cohesive central leadership, and after their initial demand that the bus fare hike be rescinded was met protestors offered a variety of reasons for their protests.

Protesters have mentioned a number of grievances beyond bus fares, including inadequate education and health systems, ubiquitous corruption, over-the-top government spending on mega-events like the World Cup and the Olympics as well as an increasing cost of living. Several political analysts have pointed out that this litany of complaints illustrates the rise of a larger and more sophisticated middle class in Brazil, a middle class that expects decent quality public services, minimal price inflation and reasonably honest politicians.

The Brazilian government was clearly surprised by the protests and the response to them has been somewhat schizophrenic. When their heavy-handed tactics against the initial protests backfired and the social media-enabled protests spread like wildfire, Rousseff backed off and announced plans to convene a constituent assembly to adopt political reforms, but then changed her mind and offered a plebiscite later this year to ask Brazilians what political reforms they want. Several bills cracking down on corruptions have also been fast-tracked in Brazil's notoriously slow Congress.

The protests caused a significant decline in Brazil's already weak equity markets, and some analysts have opined that the protests are leading to a further weakening of the business climate and the possibility of a change in government. On the other hand, most veteran Latin American analysts point out that while Brazil's economy and Rousseff have been buffeted recently, barring a major outbreak of violent protests, the economy is resilient, and she has strong anti-corruption credentials and is politically savvy enough to ride out the storm. 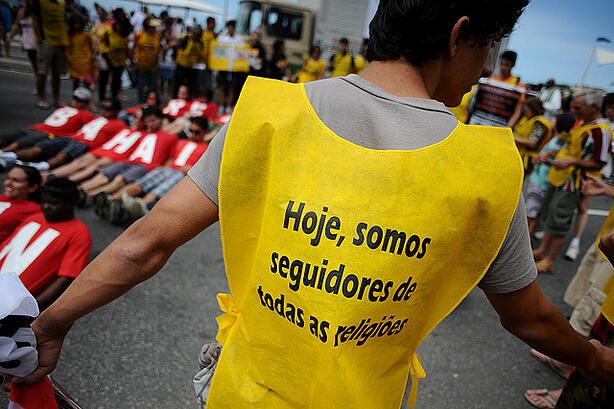 Image by Comunidade Baha'i do Brasil.