As the congratulations to the freshly crowned NCAA championship Kentucky Wildcats men’s basketball team continue rolling in, I thought it would be timely to look at some of the lessons, both positive and negative, BPO providers can learn from Kentucky head coach John Calipari.  Commonly referred to by his nickname “Coach Cal,” Calipari won his first title as a college head coach after spending more than 25 years in a colorful career that has seen its share of ups and downs. How does his experience building toward success in college hoops translate to the BPO arena?

Salesmanship is Everything
Calipari is universally credited, even by his detractors (more on them shortly), as being a master 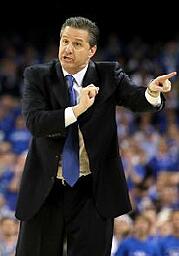 salesman and motivator. I went to the University of Massachusetts during the time he transformed a basketball team that had been in a slump since Julius “Dr. J” Erving left early to play professionally in the early 1970s, and I can say first-hand he did a masterful job in promoting the team on a campus that at that time was mostly focused on lacrosse. During Coach Cal’s reign, the team switched from playing in a small gymnasium that only fit a few thousand people to playing in a state-of-the-art arena that fit more than 9,000.

BPO providers must also tirelessly promote themselves to potential clients, and not let themselves be overshadowed by more established competitors or content to remain in a slump, however long. The right promotion can turn almost any BPO operation into a respected performer with a large audience. Of course, promotion alone cannot overcome a poor product, which leads to lesson number two.

Talent is Everything, Too
Calipari did not just use his salesmanship to attract student fans at the University of Massachusetts; he also used it to attract top talent that could start competing with name opponents and winning games. Eventually he obtained the kind of talent that led UMass to its first (and so far only) Final Four appearance in the NCAA tournament, and now is in a situation at Kentucky where based on his reputation for coaching winning programs, he attracts NBA-quality players every year.

BPO providers must become masters of evaluating and attracting top talent. At some point, there needs to be steak to go with sizzle. Make sure the services you provide are as good (or better) than advertised.

No Challenge is Too Great
When building the UMass team in the early ‘90s, Coach Cal adopted a mantra of “anyone, anytime, anywhere.” This meant UMass was willing to play any opponent, including top-ranked teams on their home courts, to gain exposure and also improve his team’s level of play.

BPO providers also need to be willing to compete with any other provider for any client’s business, even if it means challenging a global BPO leader to provide services to a Fortune 500 company. Your industry profile will be raised and also competing with the best providers for the best clients will inevitably lead you to improve both your promotions and your product.

Do It Your Way
Calipari is an idiosyncratic coach. One of his most famous quirks is that he does not believe in spending much time practicing free throws , based on the assumption that Division I college basketball players should already know how to sink an unguarded 15-foot shot. While this has led to his teams historically having low free throw percentages, it has also allowed him to spend more time working on other areas in practice that may have ultimately helped the Wildcats win it all.

BPO providers also need to trust their own instincts and provide services in a way they feel comfortable, even if some aspects of their service delivery may not be entirely orthodox. Sometimes winning means deviating from the norm.

Management Takes the Blame
The last lesson BPO providers can learn from Coach Cal is a negative lesson. As alluded to above, he is not universally loved in the world of college basketball. He has coached three different programs to the Final Four four times, and two of those appearances have been vacated as a result of improper actions of his players. While there has never been any direct evidence linking Calipari to any player improprieties, there is still a cloud of suspicion that will likely follow him throughout his coaching career, with some people concluding he is a “dirty” coach.

Similarly, management of a BPO provider will always take the blame for any service problems. If a remote delivery center not under direct day-to-day control of the central office makes a mistake, it still reflects poorly on corporate management. No matter how far-flung, diverse or subcontracted your BPO operations are, you will still be credited for their success and blamed for their failure.

Remember this important lesson when providing services that occur far away from corporate headquarters. A victory with question marks is still a victory, but not quite so sweet.