7 Steps For a Successful IT Mergers & Acquisitions Process

Here’s a startling fact: In the last few years, 83% of mergers between companies have failed to achieve the goals of the merger. What’s even more startling is that this figure has risen – not declined - from a 50% failure rate over the last decade.

Why are successful mergers and acquisitions rare?

According to Computer Weekly:

“During the fast-paced execution process, priorities such as operations integration and even the risk of losing critical operational knowledge along with human capital can be seen as an afterthought.”

But it doesn’t have to be this way.

The mistake most companies make is to treat the integration of information systems as an IT project instead of a business project. The solution? Treat IT Mergers & Acquisitions as a critical business process rather than an IT process.

To achieve this we’ve prepared seven recommendations for a successful IT Mergers and Acquisitions process.

1.    IT Must Get Involved From the Very Beginning

For any major purchase, whether buying a used car or acquiring a multi-billion dollar company, due diligence is a critical part of your decision-making and valuation process. 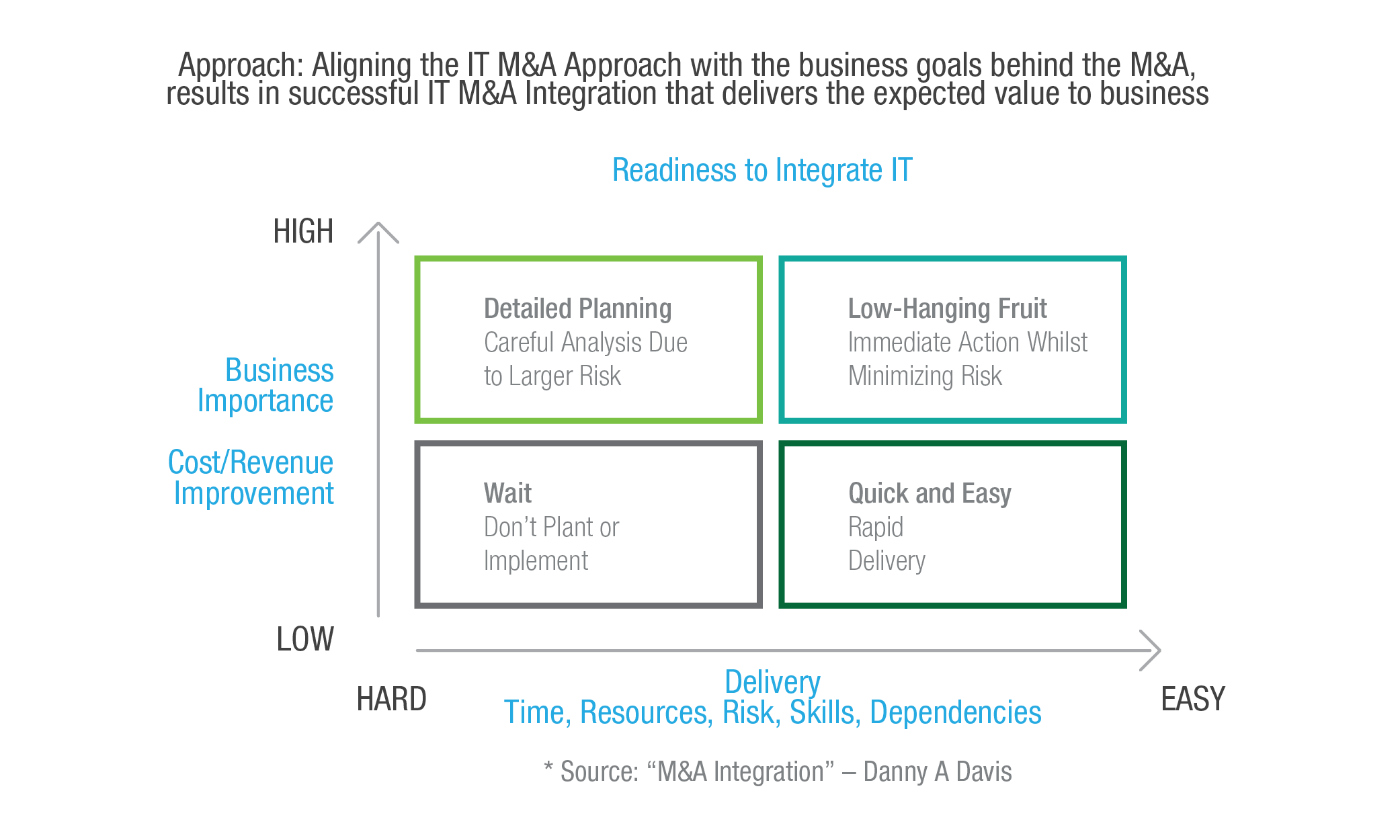 For example, when buying your teenager’s first car (which is typically a used car), you’ll check the service record, whether it’s been involved in any major accidents, and you’ll get an inspection to make sure the engine, transmission, brakes, air-conditioning (this is critical), and fluids are in check.

You should do the same in an M&A deal. The target company’s information systems are core assets that can help determine if your acquisition will be a success or not, and what the final acquisition price will be.

Your IT team needs to check the health of the CRM, the HR and ERP systems, communications networks and hardware infrastructure. Your goal is to avoid a nasty surprise that will bog your team down in a costly, time-consuming process when you finally get to the integration.

How do you get the IT department involved early? Name an IT M&A leader as part of the acquisition planning team. An IT M&A leader is a specialist who has the experience to understand the complexities of integrating the disparate systems of two different companies, and who also understands the business implications of the integration.

2.    Align Your IT Priorities with the Business Goals of the Acquisition

Mergers and acquisitions happen for specific business reasons, and they usually fall into four categories: business extension, bolt-on or carve-out, full company acquisition or merge of equals. Within each scenario there are specific advantages you are hoping to achieve.

For example, you might want to expand into a new market, in which case the customers of the target company provide critical value. Or you might be in a regulated industry such as financial services, and compliance is a huge issue for you.

But usually the opposite happens.

In many M&A projects the IT department defaults to tackling the easiest integrations first, such as merging both companies’ HR systems, or consolidating IT systems to streamline operations. Then 5 or 6 months later executives are scratching their heads wondering why they haven’t gotten any value from the acquisition yet; or worse, they may be out of compliance and facing potentially huge fines.

With the increasing speed of business and intense competitive pressures enabled by the growth of social, mobile, analytics and cloud, executives expect to get value from their acquisitions immediately.

By comparison, just as recently as a decade ago, integrations between a company’s systems were sometimes taking as long as two or even three years.

Today that spells death for an important merger.

With an agile integration process the IT department delivers that value quickly. What does this mean? It means you must develop a roadmap with short and expedited deliveries that can deliver value in days and weeks rather than months.

4.    Ensure Your Processes are Flexible

Together with the agile approach you should also ensure your Merger and Acquisitions processes are flexible. For example, market trends or customer priorities might change halfway through your integration, or you might find yourself with a tighter budget for your integration than you had anticipated.

For example, if budgets are tight, instead of completely migrating all the target company’s data into your own, you could build an interface into the target company’s ERP or CRM systems with a versatile integration application such as Informatica, or with some simple API calls.

5.    Build a Scalable IT Infrastructure

If you’re going through your company’s first M&A, chances are this won’t be your last. And it’s likely your company’s strategic vision is to expand internationally through an M&A approach.

Your key to helping fulfill this vision is to ensure your internal systems are scalable.

For example, if you plan expand into Brazil, Mexico, Asia and Europe through an M&A strategy, not only will you have to integrate a wide variety of IT systems, but you’ll also face vastly differing accounting systems, regulations and compliance issues. 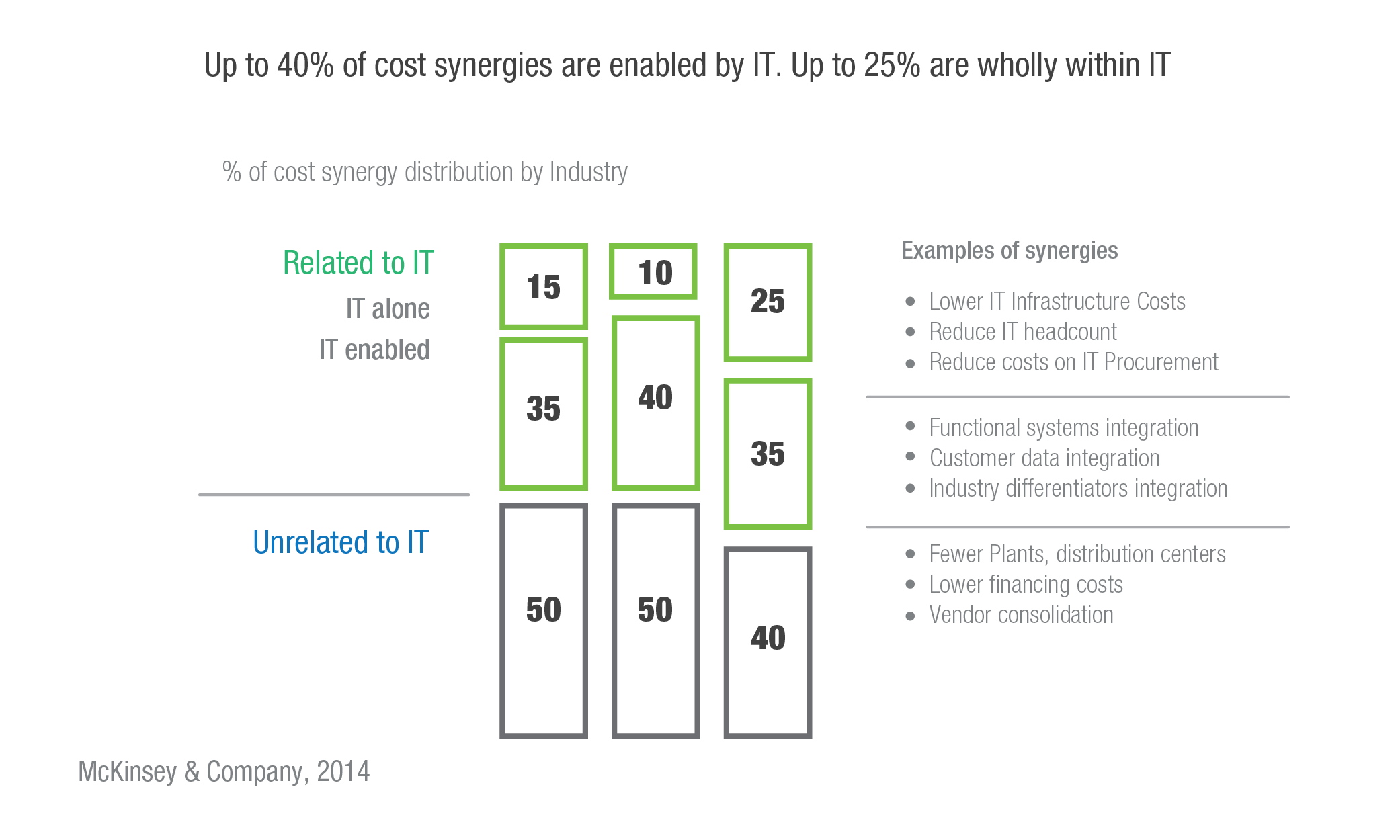 How scalable are your systems for increased global M&A activity? If you’re running on systems built in-house, they’re probably not very scalable. And despite the cost advantages of custom-built systems, when embarking on an M&A-fueled expansion the costs of integrating with proprietary systems can get out of hand.

Instead, standardize on commercially available software applications. For example, you’ll be much more scalable if you run your company on popular ERP applications such as SAP and JD Edwards, just to name a few vendors.

Continuing the subject of fulfilling your company’s vision of growth by acquisitions, M&A activity must become a repeatable process. The key to this is to develop your IT M&A playbook.

As is typical for most IT departments, you’ll never have enough budget to do things exactly the way you want to – but your playbook can help you overcome the three Mergers and Acquisitions integration challenges: money, time and resources.

How do you build an IT M&A playbook? We don’t have enough space to get into all the details here, but your playbook is where you document the business processes you will follow (remember, IT Mergers & Acquisitions is a business process, not an IT process) to prioritize which systems to integrate under which scenario.

For example, what are the prioritization procedures for a full acquisition vs. a joint venture? How will you show value quickly? What technologies will you use when you encounter x or y applications at your target company?

During the 2010-2012 acquisition of Continental Airlines by United Airlines, Delta Airlines swooped in and acquired thousands of elite frequent fliers at the expense of United and Continental during a disastrous glitch in the merged frequent flier system.

United/Continental lost millions of frequent fliers, which accounted for nearly 25% of their revenues.

When you announce to the world you’re about to go through a major M&A, all of a sudden you become the focus of intense scrutiny not only from the press, but from your competitors as well.

During the integration phase United bit off more than they could chew. They tried integrating too many systems at once instead of focusing on flawless integration of the frequent flier system.

To avoid a similar fate, look at your list of business priorities, and focus all your energies on first integrating the critical systems that bring value to the acquisition.

Finally, the bonus recommendation: If you want to hire a

with your IT Mergers and Acquisitions process, we recommend the following criteria:

With increased business success and competitive advantages often coming down to who has the most innovative and responsive technology systems, IT has become a critical part of a company’s M&A plans.

To ensure successful IT Mergers  and Acquisitions project, treat it as a business process project, not a technology project. This means bringing IT into the acquisition decision process from the very beginning, prioritizing integrations to align with the business goals of the acquisition, ensuring  the process is agile and flexible, planning for scalability, developing your IT M&A playbook, and defending against competitors.